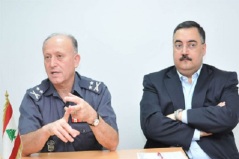 Brigadier General Wissam al-Hassan, former Intelligence Chief of the Internal Security Forces (ISF), was one of those rare Lebanese civil servants who did his job, and this ultimately cost him his life. The greatest way to recognize his work and sacrifice lies in the acceptance of this reality. Unfortunately, analyses and reactions alike have so far undermined and overshadowed the accomplishments of General al-Hassan and ISF endeavors over the years, and do little to honor the battles that he has fought to defend Lebanon’s sovereignty.

Many pinpoint blame on what they believe to be the fatality of Lebanese politics: sectarianism. Newspaper articles and commentaries evoked the return of the ‘specter’ of the Lebanese civil war, designating the confessional make-up of this complex state to be the root cause of al-Hassan’s assassination. Ghost stories, however imaginative they may be, offer little explanation as to what really happened these past few years with the reform of the Internal Security Forces. Ghost stories and the sectarian excuse are also a convenient way to scapegoat the morbid reality of all these killings. To blame some metaphysical fatality is also to neglect the pursuit of justice for the victims of these crimes. Wissam al-Hassan was not killed as a result of an ongoing ‘war’ between Sunnis and Shiites. He was killed because he was months away from becoming one of the most powerful independent figures in Lebanon.

The terrorist attack in Ashrafieh cannot be understood without placing it within the context of both Lebanon and Syria’s respective March 14 2005 and March 15 2011 Revolutions. And yet, while this broad and all-encompassing revolutionary umbrella gives historicist meaning to death under the dictatorship of Bashar al-Assad and his proxies, it fails to offer details of what became Lebanon’s most rigorous law enforcement institution: the Internal Security Forces under the leadership of Ashraf Rifi and his right-hand aide, Wissam al-Hassan. The fate of ISF, al-Hassan, and Lebanon’s sovereignty were intrinsically linked, and this ultimately resulted in his assassination.

Before 2005, the Internal Security Forces were a deficient force. The ISF lacked funding, capacity, manpower, infrastructure and the necessary equipment and expertise a normal security apparatus requires to operate effectively. Further, with the presence of the Syrian occupation force, both Hafez and Bashar al-Assad’s regimes, in an effort to exert maximum control over Lebanon, limited the proliferation of independent state bodies. After the expulsion of Syrian troops from Lebanon following the assassination of Rafik al-Hariri that culminated in the Cedar Revolution, Najib Mikati was selected as the consensus candidate to head a caretaker government between April and July 2005. During his short mandate, Mikati appointed Tripoli-born Ashraf Rifi as General Director of the ISF. Little did anyone know at the time that Major General Rifi’s arrival at the head of this seemingly insignificant institution would soon change the course of Lebanese politics.

At the time of Rifi’s appointment, Wissam al-Hassan, a man of modest origins, was an ISF attaché who worked with Rafik al-Hariri. He had been in the security detail of the former Premier, and escaped death on the day of the bombing only because he happened to be taking an exam to improve his professional profile as he rose through the ranks of the civil service. In 2006, Brig. General al-Hassan was promoted by Ashraf Rifi to head ISF’s Information Branch. This promotion took place in a context of major reform within the ranks of the police apparatus. At the time, the Information Branch was composed of three officers and twenty policemen. Seven years on, it now commands a 5,000-strong force. Rifi, throughout his mandate, completely revamped the internal workings of the ISF. His dynamism brought the institution more funds, which allowed him to create an effective and important security apparatus in a volatile Lebanon. The many branches (Operations, Intervention, Information, etc.) saw their capacities enhanced. Recruitment was increased, staff sent abroad to the United States and Germany to receive advanced training, and funding allowed the ISF to invest heavily in new technologies, weapons, vehicles and equipment necessary to turn it into an effective institution. Under Rifi’s command, ISF staff professionalism came to represent an exception amongst the plethora of corrupt and inefficient Lebanese bureaucracies.

These reforms, coupled with Ashraf Rifi’s rigor, yielded tangible results. Over the years, and under the auspices of the ISF’s Information Branch (headed by al-Hassan), some 40 Israeli spy cells were uncovered, the Fath el-Islam terrorist group was disbanded, kidnapping and car jacking decreased, and numerous drug rings were busted. Ordinary citizens quickly recognized ISF as an institution that was there to protect them. Other notable developments included the incorporation of human rights norms into Lebanon’s police practices. Before Ashraf Rifi’s reforms, lawyers were not allowed to accompany individuals who were arrested to police stations. Now, all suspects have the right to consult a lawyer when placed under arrest. In general, ISF fought to create a serious apparatus to stop all crime, independently of any political affiliation.

One of the Internal Security Forces’ most notable achievements, one that cost one of its captains his life, dates back to January 2008. It concerned the discovery of an intricate multiple mobile phone network used by the assassins of Rafik al-Hariri, starting months before his murder to minutes before the car bomb that killed him went off. The collected evidence was handed over to the Special Tribunal for Lebanon, and it was later revealed that the suspects implicated in Hariri’s assassination were affiliated to Hezbollah. Captain Wissam Eid, who was trained by Wissam al-Hassan and worked under his supervision in the ISF’s Information Branch, was killed on January 25, 2008, only a week after handing over the data to the tribunal. This breakthrough was the first amongst many that would transform the ISF into a veritable nemesis for Bashar al-Assad’s Syria and its proxies in Lebanon.

After Saad al-Hariri’s trip to Damascus in December 2009, the ISF continued to pursue its work in an independent manner, despite the political pressure being exerted on its General Directorate to halt activities perceived to be too sensitive to many in Lebanon and Syria. In October 2010, Bashar al-Assad issued an arrest warrant on behalf of Jamil el-Sayyed that included the names of 33 Lebanese citizens perceived as being too dangerous for Syria. Ashraf Rifi was among those listed. Three months later, Saad al-Hariri’s cabinet collapsed. Despite the political turmoil and leadership void that ensued, ISF continued to perform its duties. In May 2011, in a move that surprised many, Rifi and al-Hassan ordered the ISF’s Information Branch to prevent former Telecommunications Minister Charbel Nahhas of Michel Aoun’s Free Patriotic Movement (an ally of Hezbollah and Bashar al-Assad) from illegally seizing telecommunications equipment from a ministry building. Since caretaker minister Nahhas did not have the legal prerogative to authorize such a move, his actions were perceived by many as a blatant attempt to take advantage of an explosive situation to further sabotage the investigation of telecommunications data related to political killings in Lebanon.

Since the beginning of the Syrian Revolution, the Internal Security Forces have gone to great lengths to limit al-Assad’s attempts to spread chaos in Lebanon. Ashraf Rifi and Wissam al-Hassan have continuously protected anti-regime protestors from being attacked by pro-Assad henchmen, in addition to preventing the deportation of Syrian nationals illegally detained by Lebanon’s General Security Directorate, currently under the control of pro-Hezbollah Abbas Ibrahim. When Najib Mikati’s March 8 cabinet came to power in June 2011, Hezbollah and the Free Patriotic Movement (FPM) exerted considerable pressure to have Rifi removed. His replacement, however, would have caused the Premier far too many problems. On the one hand, the removal of Rifi would render Najib Mikati a persona non grata in the latter’s hometown of Tripoli. Without Ashraf Rifi protecting him, Najib Mikati, who enjoys little popularity in Tripoli as a result of his alliances, would be prevented from returning to Lebanon’s explosive second city. Moreover, Rifi’s position at the head of Lebanon’s most cohesive security apparatus provides the minority Prime Minister with leverage against elements of Hezbollah, FPM, and Amal in his government.

Ashraf Rifi and Wissam al-Hassan’s boldness and sense of service to Lebanon placed the two men at the forefront of the country’s polemics. Their ambitions, though, did not go beyond their duty. Both Rifi and al-Hassan were nationalistic, and worked solely to pursue the betterment of their country and Lebanese society as a whole. Their integrity quickly became appreciated by the March 14 coalition. Yet, it is a common mistake to associate the ISF with March 14. While ISF activities have coincided with the coalition group’s politics, and have at many times reflected the demands and aspirations of the leadership of the current opposition, it is March 14 that has, over the years, come to associate itself with the Internal Security Forces. As a close aide of Rifi and al-Hassan, who prefers not to be named, coins it, “it was March 14 that grafted itself onto Ashraf Rifi and his Internal Security Forces, not the other way around.”

Another momentous ISF breakthrough came in August 2012, when in Syria decisive battles were being fought between the revolutionaries and regime troops. Al-Hassan’s Information Branch uncovered a Syrian plot to target large gatherings in Lebanon in a bid to spark a new sectarian conflict. This led to the arrest of Michel Samaha, a former minister and one of Bashar al-Assad’s most trusted agents in Beirut, who was tasked to personally carry out the sinister plan. Based on evidence provided by the Internal Security Forces, an arrest warrant was also issued by Lebanon’s judiciary against Ali Mamlouk, al-Assad’s chief security officer, while other data has shown that Buthaina Shaaban, Syria’s chief media officer, and Jamil el-Sayyed were also implicated in the plot.

To many, Wissam al-Hassan’s discovery was the event that triggered the chain of events that ultimately led to his killing. While the link between the two events undoubtedly accelerated the carrying out of al-Hassan’s death sentence, the Brigadier General represented, even before the Samaha conspiracy, Syria’s most formidable foe in Lebanon.

In April 2013, Ashraf Rifi will step down as General Director of the Internal Security Forces, and Wissam al-Hassan was to replace him. By killing al-Hassan, the Syrian regime intended to deal a fatal blow to the ISF, crippling Lebanon’s only sovereign security apparatus, and the very force that prevented them from successfully exerting full control over the country. Wissam al-Hassan embodied the future of Lebanon’s security, and his enemies could not have chosen a better target.

While the circumstances of Wissam al-Hassan’s killing are reminiscent of the assassination of Rafik al-Hariri and all of Lebanon’s fallen martyrs, the current context provides hope for the future. In 2005, Lebanon was alone. While we were able to liberate the country from Bashar al-Assad’s tyranny, our struggle stopped at our borders with Syria. Today, with every passing moment, Syria’s revolutionaries come closer to toppling al-Assad. Bashar may have won this battle in Beirut, but this is ultimately only because he is losing the war at home.