Is Tunisia at War? 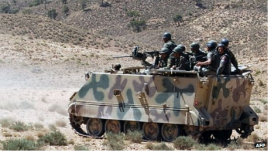 Right after Tunisia’s Prime Minister Ali Laarayedh wrapped up a press conference on the brutal assassination of opposition leader Mohamed Brahmi on 29 July, a military convoy was ambushed in the Chaambi Mountains – located in the country’s north-west – resulting in a number of deaths and injuries. Some of the bodies were found beheaded, while others had been mutilated. The attack plunged Tunisia into a second period of national mourning in less than a week. The following week, the Tunisian army launched a military operation, including air strikes, to purge the Mount Chaambi of radical Islamist elements that have been attacking military targets over the past months.

The assault occurred against a backdrop of small-scale military operations that have been on going since 2012. The attacks against military personnel are organized and deliberately violent. Mutilation and castration are methods of war that have the aim of inciting fear. It is legitimate to ask if the military operations are not more serious than what official sources have continued to claim over the past year. The Mount Chaambi natural park, which borders Algeria and covers an area of around 16,000 acres, is an area that has historically served as a refuge for a variety of insurgents. Revolutionaries against local political regimes along with smugglers and other mavericks, most notably under the Ottoman Empire and French colonial rule, used to take refuge in the mountainous terrain.

More recently, radical Islamists started maneuvering around Chaambi in the 1980s, when insurgents who had been fighting in the Afghan jihad began returning. But their presence only started to be noticed significantly as the Arab uprisings unfolded. Their ranks have swelled in recent years as fighters affiliated to Al-Qaeda in the Islamic Maghreb (AQIM) returning from the Libyan revolution and the conflict in northern Mali sought a safe haven from state forces.

Communiqués from the Ministry of Defense allude to ‘terrorist’ groups, linking these attacks to the global jihad, a generic name used to avoid naming Al Qaeda and its affiliates. The Ministry’s explanation – until the carnage of July 29 – claimed that soldiers were facing threats linked to minefields, excluding direct clashes. The military maintained, however, that the militant cells were localized and encircled. Still, little is known about the groups and individuals behind the attacks, their identities and motives remain shadowy.

Declarations of some radical salafists (often suspected to be jihadi) groups, such as Ansar al Sharia, which describe the Army as an oppressive and heretical force, appear to confirm the Defense Ministry’s accusations. The same groups have also suggested that Algerian intelligence agencies are behind the Chaambi attacks, in an allusion to the role that these agencies allegedly played in the Algerian civil war, also referred to as the ‘Dark Decade.’

Moreover, a number of anonymous accounts have surfaced, in which soldiers claim that the targeted regions are in military lock-down. These accounts allude to possible conspiracy theories. Figures in the opposition (Nidaa Tounes and the Popular Front are the most vocal, but statements were also made by some independent ‘secular’ figures) as well as certain security officers (grouped in the Republican Security Syndicate), are pinning the blame on Ennahda. Critics have argued that Ennahda, the largest parliamentary bloc, is seeking to destabilize the country in order to frighten its opponents.

Many questions remain unanswered. Were the casualties actually the result of soldiers stepping on land mines, or the result of attacks? Is the army apparatus trying to hide the truth? Are the days in Chaambi calm when there are no casualties reported, or are there daily skirmishes taking place? Are the fighting zones limited in scope, as claimed, or do they extend deep into the forest? Are there any Algerian or other non-Tunisian militant cells involved in the fighting?

Tunisia’s Chaambi region is comparable to Egypt’s Sinai. These remote regions, lying beyond the complete control of the state, are considered ideal by radical Islamist groups to pursue their activities. The Sinai desert is notorious for its harsh conditions. In Chaambi, a massive forest dominates the mountains making it difficult for security forces to penetrate and secure the region. Another advantage that the Chaambi and Sinai offer insurgents is nearby and difficult to guard border areas, which provide ample opportunity for arms trafficking and retreat. Sinai militants receive supplies from tunnels leading to the Gaza strip, while Algeria’s eastern region offers refuge to fighters in the Chaambi.

On the political front, cooperation between Tunisia and Algeria is at a standstill, and it is unlikely that militants can easily cross the border from Algeria without a certain level of complacence on the part of Algerian authorities. Likewise, Hamas encourages weapon transfers to insurgents in Egypt and has even been held responsible for coordinating attacks against Egyptian security personnel in the past.

During the rule of Bourguiba and Ben Ali, the Tunisian military – understaffed and underequipped – remained confined to its barracks and was kept away from the political arena. Since the army has been called upon to secure the restless region of Chaambi, its many shortcomings have been revealed. This is the first major event involving the Tunisian army and its soldiers lack combat experience. Nevertheless, and despite its faults, the army remains popular amongst ordinary Tunisians, having played a positive role in Ben Ali’s toppling over two years ago.

The main information about the Chaambi events comes from the Ministry of Defense and the Prime Minister’s office, while media investigations rarely go deeper. Mount Chaambi is a military zone, access to which is restricted to journalists and civilians. In his press conference, the Prime Minister appeared confident that the security situation was improving. The ambush came as a direct contradiction to his claims, further denting his already low credibility. Ordinary Tunisians are now increasingly questioning the veracity of the Defense Ministry’s briefs, and the role the army is playing may become a topic of derision.

Many questions, along with rumors and conspiracy theories, will not be answered unless the military and political authorities become more transparent and open in their communication. Meanwhile, the murky Chaambi operation is slowly becoming the ‘Chaambi War’ for citizens and observers alike. Such an image is a blow to Tunisia’s tourism-dependent economy, a stain on the army’s reputation, and a theater for radical Islamist propaganda.

Youssef Cherif is an MA candidate in International Relations at the Department of War Studies of King’s College London. He is an award winning blogger (Fayla) and a frequent commentator on North African affairs, with a focus on Tunisia. Youssef studied Ancient History and Archaeology at the University of Tunis I & II and the American University of Beirut, and holds an MA in History from Columbia University. He tweets @Faiyla