Has the European Union finally turned into an influential actor in the Israeli-Palestinian conflict? 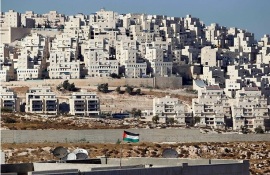 The European Union’s stance on the Israeli-Palestinian conflict has long emphasized Israel’s right to security but need to end its occupation, and the Palestinians’ right to self-determination but need to renounce terrorism. This past summer, newly-released EU guidelines on Israeli entities operating in the occupied Palestinian Territories shook this well-rehearsed mantra to its core. Preceded by the February appeal from the EU’s Heads of Mission in Jerusalem to take concrete measures against the occupation of Palestine, the Union decided to attach negative economic consequences to the continuation of Israel’s illegal settlement enterprise.

With the guidelines, the EU has declared that Israeli entities operating in the Golan Heights, the Gaza Strip, the West Bank, and East Jerusalem risk being barred from receiving EU funding. To remain eligible for so-called ‘loans’, Israeli entities cannot have any of their operations take place in the occupied territories. Those seeking to benefit from the much larger pool of EU ‘grants’ are not allowed to be legally registered outside the 1967 lines, but can pursue other activities there as long as these are not the ones the grant funds are spent on. This might not seem to be a significant move at first glance, but it might just indicate a sea change in the way Europe deals with the conflicting parties, especially Israel.

Over the past couple of years, the EU has become increasingly vocal in the conflict. Since 2012, the EU has underlined the importance of establishing a Palestinian state as a strategic objective. While there has been no fundamental shift in the EU’s position, still preferring to play second fiddle to the United States, it has taken steps that have at the very least gotten attention from Israelis and Palestinians alike. That the EU is no longer afraid to ruffle a few feathers was exemplified by the US Secretary of State John Kerry asking EU officials to postpone or withdraw the guidelines altogether.

In the wider region too, the EU has made it clear it wants to be seen as a serious actor. Last year, it placed the Lebanese Hezbollah on its terrorist organizations list in response to the party’s entering the conflict in Syria. In Egypt, it tried, unsuccessfully, to mediate between the imprisoned Muslim Brotherhood leadership and the military rulers. The recurring tragedies involving refugees from Libya, Sudan, Somalia and Syria trying to reach European shores were another reminder that the EU would do well to take a more pro-active role in the Middle East and address problems at their roots. The humanitarian catastrophes unfolding in Syria, Jordan and Lebanon today also require a stronger European response beyond the delivery of humanitarian aid.

The uprisings in North Africa have shown that the EU’s policies toward the Mediterranean have indirectly contributed to the fragile political systems and dire labour situations, preferring unilateral security interests over democracy promotion and reform. As the EU struggles to find its footing in these tumultuous developments, it is now putting more energy into the Arab-Israeli conflict, which amidst the regional turmoil has remained a constant throughout.

Putting the focus back on the Middle East Peace Process

More factors have contributed to the EU’s prominent move into the conflict. The consequences of the relative US disengagement from the region could have serious repercussions for Europe, which is witnessing its southern borders rife with conflict and instability. The Quartet, the group of mediators consisting of the UN, the US, the EU and Russia, has failed in its task to further the peace process. Now that the US has once again taken the lead in mediating between the two sides, the EU saw both an opportunity and a necessity to make a move of its own. In that respect, the settlement guidelines are intended to increase the pressure on Israel to come to an agreement with the Palestinians.

Some argue the Union’s decision to speak out against the settlements was motivated by a sincere concern for the fate of the Palestinian people. Twenty years after the Oslo Accords, and with no prospect of a breakthrough in peace talks in the near future, they hold it is increasingly difficult for the EU to passively stand by as the political, socio-economic, and humanitarian situation in the Territories deteriorates.

Yet, moral concerns do not fully account for the EU’s condemnation. Instead, the guidelines reflect the bloc’s strategic interest in evolving from an essentially economic type of regional cooperation into an international player whose external relations also comprise questions of peace and security. In concrete terms, they point to the EU’s dissatisfaction with addressing the Israeli-Palestinian conflict in a solely economic manner, and underline its aspiration to increasingly acquire a political role as well.

No longer satisfied with merely the role of financier, the EU is trying to transform its economic power into political leverage. Of particular relevance to the Israeli-Palestinian conflict is the EU’s development into the largest financial contributor of the Palestinian Authority. Instead of serving mere economic purposes, the EU has purposively propped up the pro-Western PA to dupe Hamas, which it classifies as a terrorist organization since 2003. In a similar vein, the EU famously boycotted the 2006 electoral victory of Hamas to the Palestinian Legislative Council, prohibiting the flow of development and humanitarian assistance to the Hamas administration.

By publishing its new guidelines, the EU similarly expected to add political clout to its economic strength. Particularly, it used its status as Israel’s main trade partner to convey a political message against the continuation of Israel’s settler policy. In this way, and aware of the diplomatic firestorm that such move would certainly set off, the EU hoped that its role as a political player of importance would no longer be a question, but a reality.

It is easy to conclude that the EU’s logic has proven counterproductive. For a start, although the Palestinian administration has thanked the EU for its support, it has in no way asserted the need for the EU to be incorporated in the current round of peace negotiations. Additionally, Israeli President Shimon Peres has told the EU not to meddle in affairs that he thinks are none of its business, and has explicitly precluded the possibility of a European role in mediating the parties involved. Instead of shoring up the EU’s credibility as an international player, many claim the EU guidelines have thus painfully reiterated the little esteem held regionally for EU foreign policy.

Just because the guidelines did not transform the EU into a political player on par with the US, does not mean they have had no impact on the parties at all. It is without doubt that the guidelines greatly contributed to the PA’s decision to enter peace talks with Israel later in the summer. Indeed, with the US generally perceived as biased in favor of Israel, the PA found in the EU an alternative international supporter, and therefore felt in a strong enough position to enter negotiations. What is more, the Netanyahu administration has referred to the move as a political earthquake that would fundamentally alter relations between the EU and Israel. Taking this tougher stand has therefore caused quite a stir, and just as the EU hoped for, it has confirmed the importance of its political views to the parties directly involved.

Whether the EU has set itself on a path towards a more confrontational policy regarding Israel remains to be seen. In recent years, the BDS movement has been gaining ground, and civil society is taking the lead in acting against the Israeli occupation of Palestinian territories and violations of international law. In the past weeks, the largest academic organization in the US voted to end collaborations with Israeli partner institutions, while Holland’s largest pension fund cut its investment ties with Israeli banks that are financing illegal settlement construction. It seems that the pressure exerted by civil society and socially responsible businesses is now beginning to sway EU foreign policy making.

In its ‘stress test’ of the two-state model, the European Council on Foreign Relations argues that third-party diplomatic interventions are the strongest sustainer of the two-state solution. In that regard, the EU’s stance is to be welcomed, but the Union should be prepared to ramp up the pressure and stand up to Israeli pressure and provocations.

Over the years, growing exasperation with Israel’s policies in various European capitals has led to a stronger consensus to act on the EU level. The added benefit being that acting in unison also shields individual member states from being labeled as anti-Israel. During the EU foreign affairs council on 16 December of last year, the five largest members, Germany, France, the UK, Italy and Spain, put more pressure on the conflicting parties than ever before. The EU offered an ‘unprecedented package of political, economic and security’ support to both parties if they come to an accord while at the same time issuing a clear warning to Israel that settlement building is the greatest obstacle to an agreement and that any failure of it would entail serious consequences. Whether this could mean the (partial) suspension of the Association Agreement between the EU and Israel, which offers preferential trade access, remains to be seen. It is a measure that a growing chorus of rights groups and politicians is calling for.

In the meantime, the EU will need to rethink the way it deals with the Palestinians. The tarnished legitimacy of Abu Mazen and Fatah as well as the continuing boycott of Hamas and the grave humanitarian situation in Gaza are clear indications that purely financial and technocratic support no longer works. Propping up Fatah at any cost is not a viable long-term strategy. In short then, the EU needs to get tough with the Palestinians as well.

After years of reporting and declarations deploring Israeli actions, in clear contradiction with its own legal obligations to suspend trade accords with Israel in case of human rights violations, is the EU finally putting its money where its mouth is? If the EU chooses to truly leverage the political conditionality embedded in its economic partnerships, and if a consensus amongst member states arises that acting in union offers clear advantages, then relations with Israel and the PA might indeed have moved to a different level. In Israel, this episode also served as a wake-up call to those that thought that the government’s settlement building would continue to be met with acquiescence from international actors.

Israel of course reacted angrily to the guidelines, yet it realized it could not afford losing the generous EU funding and another blow to its image. A final agreement with the EU let Israel save face while the guidelines remained in place. Noticeable also was the involvement of 114 Members of the European Parliament, who urged the EU not to backtrack on its initial plans. The agreement also allowed Israel to sign up to the EU’s Horizon 2020 programme which is the main financial instrument offered to Israeli entities, with the restrictions imposed by the guidelines unaltered. In turn, the EU allowed the guidelines to remain unmentioned in agreements signed by Israeli institutions, and promised they would not prejudice future Israeli-Palestinian negotiations. The guidelines have thereby revealed that a united stance in Brussels might be more significant than often thought. As such, if anything, the EU ought to feel confirmed in its aspiration to become of political importance internationally.

Romana Michelon is a graduate student of Conflict Resolution at King’s College London. Currently working for IERI in Brussels, she holds an MSc in International Relations from the University of Amsterdam, and has worked for think-tanks in Madrid and Maastricht. Her postgraduate dissertation delves into the role of the Jewish ultra-Orthodox community in the Israeli-Palestinian peace process. She tweets @RomanaMic

Bart Hesseling is Associate Editor of ArabsThink. He tweets @bhesseling

One response to “Has the European Union finally turned into an influential actor in the Israeli-Palestinian conflict?”