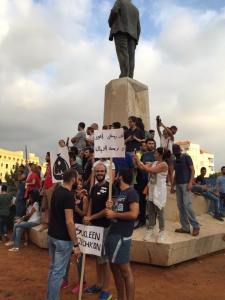 Lebanon’s micro-uprising has been remarkable in many ways. At first, the “You Stink” movement began as one of modest proportions, interested in the resolution of the extant waste management impasse. Unreasonable repression and governmental indifference, however, unearthed a shared sense of contempt towards a political class deemed by many as corrupt and unable to lead. The movement grew, and with it a debate resounded in Lebanon and abroad. Discussions quickly turned to the workings of our political system and of its sinister dynamics. For some, these protests represent the birth of a Lebanese third way, led by a generation that no longer identifies with the March 14 or March 8 coalitions. The momentum appears to be growing, and yet, the fortress of Lebanese gerontocracy holds steadfast. Notwithstanding institutional resistance, something has changed. This new societal dynamic, while remaining intrinsically rooted in the idiosyncratic nature of the Lebanese political system, may represent a shift of systemic dimensions. END_OF_DOCUMENT_TOKEN_TO_BE_REPLACED

Beirut Protests: This Is Not a Class Struggle

Last weekend Beirut witnessed one of its largest independent protests over two consecutive days. These came at the end of a string of steadily growing demonstrations‎ organized by the #YouStink movement, an independent collective that began by demanding an ecologically responsible solution to the current Lebanese trash crisis. Centering on the issue of garbage disposal ensured that the group received widespread support and legitimacy, eventually ensuring massive participation at their first major rally last Saturday August 22nd. To be sure, by that point many other, predominantly left-wing groups had joined in and the stage was set for widespread civil intervention. But with the inclusion of so disparate a collection of Lebanese citizens, it was only a matter of time before garbage took its place beside many other pressing issues that naturally came to the fore. END_OF_DOCUMENT_TOKEN_TO_BE_REPLACED