This article was first published in Arabic. 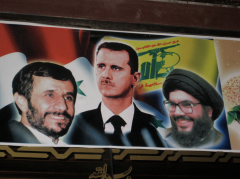 In a recent speech, Sayyed Hassan Nasrallah, the secretary general of Hezbollah, reasserted his party’s support to the Syrian regime. Among his rather far-fetched statements was the blunt denial of what is happening in Homs, describing the city’s massacres merely as exaggerated events. While the people of Homs face a brutal ordeal, Hezbollah is far from changing its political course. Successful policy is based on adapting to changing times and the emergence of new political players. While change has swept across the political scene in the Arab world with new powers rising and others declining, one cannot help but wonder where Hezbollah’s policy, the fierce defense of a doomed regime, will lead it; all this in the context of the changing prospects of regimes across the Arab world.

Roughly a year has gone by since the start of the Syrian revolution, yet the Baathist regime proceeds with its campaign of killing and torture, punishing the Syrians for their pursuit of freedom. Let us be clear here: no one expected to witness so much courage and resistance from the Syrian people. Many predicted the opposition to fail, and had not braced themselves for such a stage, where the Syrian people vowed they would not surrender, not until the last drop of blood is shed.  Amongst those skeptics were the great powers and Arab states, which could not be bothered to take action at the start of the revolution with many expecting the popular uprising in Syria to be quashed. The United States is still reluctant to fully support the overthrow of the regime, as there is great uncertainty about whether or not new leadership in Damascus would be in Israel’s best interest. Since Hafez al-Assad’s 1970 coup, the Syrian regime has been the protector of Israel’s borders, preventing anyone from coming close to its ideological archenemy.

Nevertheless, the Syrian people’s tenacious resistance has brought about a new situation and a change in positions towards the regime, however late, with several Gulf countries expelling Syrian ambassadors and the US withdrawing its ambassador from Syria. Protests around the world were launched in support of the Syrian people. Across the Arab world, in spite of the difficulties they are currently facing, people have expressed their full support to the Syrian revolution. Even Syrian/Iranian-backed Hamas revealed somewhat of a compassionate stance by decrying the death of innocent civilians in Syria followed by their full-fledged support for the uprising.

While there is little doubt as to Hezbollah’s skills in the diffusion of propaganda and the use of emotions in order to manipulate their “masses”, it seems to lack vision:

1-     By supporting the Assad regime, Hezbollah lost much of its appeal in the Arab world. The image the party built over the years and promoted through the media was that of a bulwark against Israeli aggression, an image it lost when it sided with the oppressor against the oppressed. Today, Nasrallah’s pictures are being burnt in Syria’s streets.

2-     Through supporting the Bahraini revolution and rejecting the Syrian one, Hezbollah emerged as nothing more than a sectarian party. As for the blind loyalty it vows to the Islamic Republic of Iran, there is no denying that the Party of God has always fueled sectarianism, exacerbating religious discord between Sunnis and Shiites. Further, Hezbollah’s Shiite extremism has led to the emergence of a fiercer form of Sunni extremism. Sadly, it seems Hezbollah is rushing the entire Shiite community (regarded as a minority in the Arab world) into the abyss. Although many Lebanese Shiites do not support it, their say remains limited. Scrolling down the comments made on Facebook and Twitter, one can see their anger towards what is happening in Syria.

3-     Hezbollah engaged in the turbulent Lebanese political scene; it concealed corruption, used its weapons against its domestic rivals while supporting armed allies maintain their influence in Lebanon. All of this has led to the party losing much of its popularity. Moreover, the number of Southern Lebanese voters opposed to Hezbollah’s political views is growing, as seen in the 2010 municipal elections. Hence, the party does not represent all of South Lebanon.

4-     The fragility of Hezbollah: The party relies on Iranian aid and the support of the Syrian regime. Today, the tables are turned as the Syrian regime itself is in dire need of support and is on the brink of collapse. As far as the regime in Tehran is concerned, the economic sanctions against it are growing in scope on a daily basis, not to mention the growing, albeit persecuted, opposition movement.

Why would Hezbollah gamble with the future of Lebanon’s Shiite community, and that of the entire country? We know that Lebanon’s Shiite community holds great domestic wealth, counts highly qualified and educated individuals, and boasts a promising and dynamic youth. Will we hear another ‘had I known?!’ echoing with Nasrallah’s saying after the 2006 war with Israel? What would happen to Hezbollah if the Syrian regime falls and Iranian aid is reduced? What would happen if Hezbollah’s own government is overthrown at home, and public pressure rises against it?  Does the party’s leadership not realize that it is losing many of its allies at home and in the Arab world?

Nasrallah’s two latest speeches confirm his party’s current state of confusion, as each speech came off as incoherent and of illogical content. The empire that Hezbollah built reached its peak in 2000, and it is now in decline. Hezbollah may very well be committing political suicide.