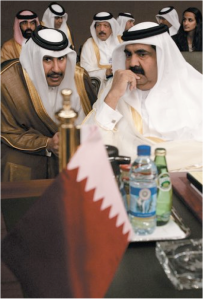 The incredible diplomatic activity of the tiny peninsula nation of Qatar heralds a major shift of power, as the old power brokers in the Middle East are either embroiled in revolutionary fervour or too nervous about upsetting the regional system, fragile as it is. Qatar has no such qualms and has thrown its full weight behind the forces of change. On the diplomatic front, after having pushed the Arab states into an unprecedented UN-backed coalition with NATO that proved crucial in ousting Qaddafi, Qatar is now spearheading the Arab League’s moves to put maximum pressure on the regime in Syria.

Qatar has important assets: vast natural gas reserves, the most influential television channel in the Arab world and a strong brand name developed by a dynamic leadership.  As with any autocratic regime, its intentions are not always clear but what is certain is that Qatar’s ambition to be counted as a regional power has been given a boost by the events of the Arab Spring.

Qatar’s small size and its leadership structure allow it to act quickly and nimbly (foreign policy is practically handled by two men, the Emir, Sheikh Hamad bin Khalifa al-Thani and his Prime Minister, Sheikh Hamad bin Jassem al-Thani), giving it plenty of opportunity to outflank regional mammoths like Saudi Arabia where decision-making is a slow and arduous process of consensus-building. Its diminutive size makes it an unthreatening actor, allowing it to interject itself as a broker in various conflicts. Yet with enormous financial resources it has the means to push its position effectively behind the scenes, while its cultivated image of a relatively liberal and open society ensures Western backing. This has been the recipe for Qatar’s success.

Under the Emir, Qatar has steered a course different from that of its neighbours, all while remaining an active member of the Gulf Cooperation Council (GCC). Qatar’s modern image stands as one of the most successful examples of nation-branding, of which hosting the football World Cup of 2022 is the jewel in the crown.

Of course Qatar does not have the muscle to take unilateral action. The intervention in Libya marked a departure from the ambitious but cautious policy of offering its good offices towards military action to enforce regime-change. It was only in the unusually permissive international environment surrounding the Libyan revolt that Qatar felt comfortable to take the leap.

However, Qatar’s maverick foreign policy did not originate with the Arab Spring.  Over the years it has lent its support to resistance groups such as Hamas and Hezbollah and cultivated ties with Iran, all while remaining on good terms with the United States (Qatar hosts an American airbase and CENTCOM, the US military command for the Middle East) and even Israel (although relations have cooled somewhat since the Gaza war in 2008).

One cannot help but admire the impressive brinkmanship that goes into maintaining such an awkward set of alliances.

Qatar has played the role of mediator, with varying degrees of success, in conflicts in Lebanon and the Horn of Africa. It recently staged meetings between Western officials and the Taliban in Afghanistan. And there is of course Al Jazeera, whose intrepid coverage over the years has placed Qatar at odds with numerous Arab states as well as the United States.

As the influence of regional powerhouses Egypt and Saudi Arabia waned in recent years, Qatar used the space that opened up to increase its regional role, reducing the traditional Arab powers to wary observers as it engaged in conflict-resolution efforts in Sudan and Yemen. It even took on a role in Palestinian affairs, also previously the prerogative of the Egyptians and Saudis, mediating between Hamas and Fatah after their fallout in 2006.

But the Arab Spring has kicked Qatar’s activist foreign policy into a higher gear. After a hesitant start, its leaders likely mulling over the significance and magnitude of the events that were unfolding, Qatar has been active on all fronts.

Al Jazeera went into overdrive as it offered blanket coverage of the uprisings in Tunisia and Egypt, playing an important part in the mobilization of Arab public opinion. Egypt received $500 million in foreign aid after Mubarak’s fall, and in April the Qatari Prime Minister called on Ali Abdallah Saleh to step down, in contrast to the more conciliatory efforts by the GCC to nudge him from power.

The Libyan case has been the most enigmatic display of Qatari diplomacy. Qatar was instrumental in getting the GCC and subsequently the Arab League to call for military intervention. It was the first Arab state to recognize the National Transitional Council (NTC) as the legitimate representative of the Libyan people and subsequently participated in enforcing the no-fly zone with its modest but well-equipped air force.

Yet, Qatar’s involvement was revealed to be much deeper than initially thought. It sold oil on behalf of the NTC, helped set up a free Libyan television station in Doha, provided hundreds of millions of dollars in aid and, it turned out, even sent its elite forces to direct the last stages of the rebellion on the ground.

Much of Qatar’s involvement in Libya went on behind the scenes, but it was no less crucial to the eventual outcome. It could do what the participating NATO members could not, supplying weapons and munitions to the rebels.

Qatar’s role in the Libya has not been without controversy. Recently, it has come under criticism from both the NTC and Western officials for bypassing the NTC in providing weapons and funds to Islamist factions whom have a privileged relationship with Doha.

The reversal in the Qatari-Syrian relationship has been nothing but spectacular. In recent years, with close relations developing, Qatar invested on a large scale in the Syrian economy. Qatar laboured for the rehabilitation of Syria into the international community after the isolation that followed its alleged involvement in the assassination of Lebanon’s Prime Minister Rafic Hariri in 2005. Relations between Qatar and Syria proved useful in the negotiations that culminated in the Doha Agreement of 2008, temporarily ending the Lebanese political crisis.

Doha calculated that being on good terms with Syria would engender cordial relations with the latter’s patron Iran. Now however it seems to have moved closer to the Saudi position that seeks to weaken Iran’s influence in the Arab world.

Well until after the protest movement began in March, did Qatar support Al-Assad, echoing his narrative of foreign elements bent on destabilizing Syria. Things changed after the Emir reportedly felt duped by Al-Assad.

The relative silence of Al Jazeera in the first stage of the Syrian uprising was broken by Sheikh Yusuf al-Qaradawi, a long-time resident of Qatar and prominent cleric with a large following across the Muslim world, who in his weekly show on the channel condemned the Syrian regime’s brutal repression and backed the revolt.

It went quickly from there. Qatar was the first Arab nation to recall its ambassador from Damascus and Al Jazeera started delivering the same incisive coverage as it had in other countries.

Qatar’s relations with Iran might take a hit over the Arab push against Al-Assad’s regime. How that is going to play out remains to be seen, but Iran, heavily invested in the Syrian regime’s survival, will likely react to Doha’s actions with whom it shares the world’s largest gas field.

But what agenda is Qatar pushing during the Arab Spring?

Doha’s close ties with various Islamist factions have inevitably raised fears that it is pushing for an Islamist domination over the new governments in Tunisia, Egypt and Libya.

Some conclude that Qatar is defending the cause of Sunni Islamists and point to Doha’s support for such groups in Tunisia, Egypt, Libya and Syria, while at the same time participating in the GCC intervention in Bahrain to crush protests by the Shi’a majority against oppressive Sunni minority rule. That, coupled with the sparse coverage by Al Jazeera of the protests in Bahrain, they believe, is evidence of a sectarian underpinning in Qatar’s dealings.

Others have insisted on the pragmatism of Qatar’s actions by pointing out that Doha has historically been a safe haven for dissidents and that the close ties that have developed explain the seemingly sectarian strategy.

However, it is generally understood that Qatar does support moderate Islamist parties because they have a place in Doha’s vision for government in the Arab world.  This seems to reflect the opinion in the Emiri Diwan that in Muslim-majority countries Islamic political parties can and must help build modern societies.  In a recent interview with Al Jazeera, the Emir declared that Islamists have turned to extremism and violence because of their exclusion from political life and repression, and that giving them a place in a participatory democracy will have an inevitable moderating effect.

Qatar’s ambitious actions during the Arab Spring appear to indicate it is seeking a wholesale realignment of the Middle East. The support for Islamist parties such as Ennahda in Tunisia can be interpreted as a sign that Qatar is seeking to end the era of the expressly secular republics, and is now jumping at the opportunity to bring about similar change in Syria.

It is doubtful that Qatar has such overtly imperialistic aspirations. It is more likely to be looking for validation of its model of conservative Islam and modernity as a way to ensure regime survival, and so it is only natural it maintains contacts within Islamist circles. Qatar has recognized that driving change that will result in greater compatibility between the new governments in the Arab world and its own has great benefits.

And don’t forget in all this that having double-digit annual growth rates, the world’s highest GDP per capita and a tiny native population does help. These enviable economic figures provide insulation from the revolutionary winds that have rocked Qatar’s neighbours, and have allowed the leadership greater room for manoeuver in the diplomatic arena.

An added benefit is that Qatar’s role in the Libya intervention and in pressuring Al-Assad has built up a considerable amount of good will in the international community, thereby deflecting outside pressure to enact reforms at home.

Yet democracy is an element that has been conspicuously missing in Qatar’s modern image. The irony of Qatar supporting democratic movements abroad while stalling reform at home has not been lost on the leadership. The recent announcement of elections for the consultative Shura Council to be held in 2013 should be seen in that light, as the move was not preceded by any societal pressure. What’s more, a recent poll showed that democratic representation is not of great concern for most Qataris at the moment.

Qatar has brought a new dynamism to Arab politics, divisive as it may be, surpassing the ossified traditional powers in the region. For Qatar’s leaders, being at the forefront of the Arab peoples’ fight against dictatorship will only enhance their nation’s soft power, an invaluable commodity in the region’s politics.

Bart Hesseling is currently studying Arabic at the Institut National des Langues et Civilisations Orientales in Paris and completing an MA in International Studies and Diplomacy at the School of Oriental and African Studies in London. His interests include politics and society in the Arab Gulf states, Euro-Arab relations and Middle Eastern cooking. He tweets @bhesseling

One response to “Qatar’s Trailblazing Diplomacy”