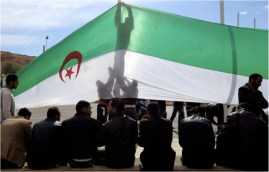 People hang up an Algerian national flag during a protest in Laghouat, 11 January 2012. (REUTERS/ Zohra Bensemra)

Since the first days of January 2012, Algeria has experienced a wave of protest and contestation in a dozen wilayas (regions) – either strikes, demonstrations or sit-ins in the streets, or in front of the wilaya headquarters, in industrial zones or even in high schools (Constantine) . This storm of protest is mostly led by Algerian unemployed youth but it has attracted people of all ages. END_OF_DOCUMENT_TOKEN_TO_BE_REPLACED