Who Lost Lebanon? From Politics of Confrontation to Compromise 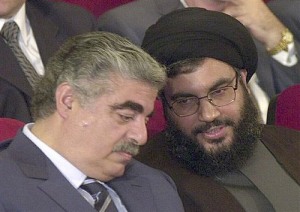 The year 2011 already seemed likely to flower into a turbulent year for the Middle East, even before the advent of the “Arab Spring” that toppled close to three dictators in the region. Hezbollah’s withdrawal from the national unity government in Lebanon, which kept the country’s chronic sectarian conflicts from resurfacing for the past few years, sparked fears that the Lebanese “time bomb” was finally going to explode. Nobody could have predicted “the Arab Spring”, a series of historical events that have rocked the region’s authoritarian regimes since January.

Lebanon, a country that was caught up in a recent war with Israel, bore witness to dozens of political assassinations, and witnessed street battles that almost pushed the country to the brink of civil war in May of 2008, has always been the source of instability in the region. However, while many of its neighbors are experiencing protests and regime change, Lebanon is no longer making headlines as it did before 2011.

Lebanon has gone through a gradual but dramatic political shift in the six years that followed the assassination of former Prime Minister Rafiq Hariri. The “Cedar Revolution” of 2005, (dubbed by some as the “Independence Intifada”) was optimistically regarded as an example of domestically bred liberalism next to a U.S. exported model of democracy in Iraq.

The Bush administration was a fervent supporter of liberalism in terms of international politics, while always carrying out a policy of distinction between its enemies and allies. This was manifested in Bush’s support for the March 14 coalition that stemmed from an effort to alienate Hezbollah and Syria from Lebanese politics. The U.S. also supported Israel’s July 2006 war in Lebanon that turned out to be a complete military fiasco for the Israelis that were unable to hinder Hezbollah’s capabilities. Bush’s sometimes conflicting support only exacerbated confrontation in the Middle East, inadvertently empowering “enemies” such as Hezbollah. Tensions escalated between rival sides March 14 and March 8, until the party of God unleashed its arsenal of weapons on fellow citizens in May 2008. Had there been no mediation effort by Qatar and other actors, the formation of a national unity solution would have been near impossible.

After 2008, the politics of compromise sought to keep the “time bomb” from exploding again while tensions began to mount over the Special Tribunal for Lebanon (STL). A rapprochement between Syria and Saudi Arabia began to take shape following the events of May 2008. This also coincided with the newly elected Obama administration’s efforts to embrace Damascus in order to isolate Tehran and bring stability to the Levant. The politics of “compromise” eventually failed with Hezbollah’s withdrawal from the unity government in January 2011.

The fall of Saad Hariri’s government, and the appointment of a March 8 backed government in June, integrated, institutionally, Hezbollah into the system. Moreover, since Hezbollah’s rise to legal power, was from their perspective, achieved via the democratic process, the party of God could no longer ignore its institutional responsibility vis-à-vis Lebanon’s state of affairs.

Though the politics of compromise did, for some time, prevent the situation in Lebanon from deteriorating, it did not allow the West and their many allies in the region from eliminating Iran’s influence in Lebanon. How was Lebanon lost to Hezbollah and its Iranian sponsors?

What the West lacked was an understanding of the rise of a Shiite political conscience that coincided with the birth of the first Arab Shiite nation in Iraq in the aftermath of U.S. imported democracy. Saddam’s fall opened up a political vacuum in Iraq, that facilitated the spread of Iranian influence from Tehran to Beirut.

In Lebanon, the rise of a marginalized and self-labelled “dispossessed” Shiite community coincided with the advent of a Persian Great Game in the Middle East. Shiites in Lebanon were not provided with basic social welfare due to the weak central government in Beirut, undermined by the country’s fractious political theater. The void in the country was subtly filled by Hezbollah, a paramilitary movement that sought to spread its influence beyond its strongholds in southern Lebanon and Beirut’s Dahieh suburb. While external powers tried to forge the future of Lebanon, a policy of neglect and appeasement towards Hezbollah did everything but restrict the movement’s totalistic ambitions from being carried through.

The fractious democracy of Lebanon can only become effective if the fierce sectarian divide that the country has suffered from for decades can be overcome. The task that Lebanon must go through is the integration of all sects into its society. The true “revolution” of Lebanon was not the “Cedar Revolution” but the rise of political awareness among the Shiites, partly channeled by Hezbollah. The future of Hezbollah remains uncertain with one of its patrons, the Assad regime, faltering next door. In addition, Iran’s economic situation has been unstable for some time now. This could also mean that Hezbollah’s funds, which constitute the backbone of the party’s generous welfare and social programs, will inevitably diminish. However, the West and its allies in Lebanon and the Middle East, must distinguish between Hezbollah and the Lebanese Shiite community and help the Shiites integrate themselves to the Lebanese society and political system. Lebanon may then truly become an effective democracy; one where all communities are equally represented in all political, institutionnal, and economic positions.