Hariri and I, February 14, 2005 and the memories of a Beiruti adolescent 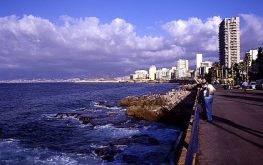 There I was, the odd and insufferable teenager, waltzing my way – rather awkwardly, and certainly with no sense of elegance – through life, and more precisely, through the seemingly oppressive routine of every child’s inevitable trajectory: school. I was ugly and emaciated. My hair was long, and I believed myself to be some sort of messiah on his way of fulfilling an obscure and prophetic destiny. The future was predictably prosperous, meaningful. Of course, an ominous atmosphere in Beirut remained prevalent, even for me. Even so, an insufferable teenager – that was what I still was. Certainly aloof, chasing girls. But never entirely so. For I grew up in post-war Beirut. It was February 14, the year 2005. Valentine’s day, and I had no date. I was sitting in history class, in a room with a beautiful view of the Mediterranean.

Just a few months earlier, in October, an explosion had rocked the capital. It had also rocked the walls of that same classroom, where I happened to be seated with my fellow classmates. A few hundred meters across from the window, and beyond the school’s football fields, a bomb had gone off on the Corniche. The smoke of the burning cars had obscured the sea beyond with a thick cloud of pollution. Some would call it foreshadowing. Others destiny. I prefer calling it what it is, a Beirut particular. Smoke and death, injustice, feudalism and remorse. Foreign meddling. Yes. This is the quintessential Beiruti paysage.

At around noon, we heard it. You didn’t need to explain very much. We were young, and probably quite stupid, but we were from Beirut. We knew that someone else had been blown up. The mood became tense and palpable. I seemed to no longer recognize the expressions emanating from the faces of my once-innocent classmates. They were suddenly older, rather sullen. A few took out their cellphones and called the police. Our teacher did not stop them.

An hour later, someone came and told me that my father was waiting for us. I was in music class at the time, on the other side of campus – closer to the sea -, and our teacher was desperately trying to get us to rehearse. Of course, none of us could stay quiet. We had our own songs to speak. What a relief to escape. When I saw my father, my brother was with him already. He didn’t talk. We made our way down to the car, and there a policeman stopped us. “Who was it?” “Hariri,” my father sharply responded. He remained equanimous all throughout. I know not how he managed his temper. But then again, he did go to a very Jesuit school.

For the next month, I do not remember going back to ACS. There were days where I certainly did return, but no one had done any homework. Half the teachers were already at the earlier protests. So were many students and their families. My parents only came home to check on us. My father was out every day with the others, my mother too. I knew that in the evenings he was somewhere plotting with Walid, Gibran, Samir -, planning the next step. But they couldn’t do it alone. The mood was still one of mourning. People still had not assimilated what had really happened; come to terms with events. Deep down, I knew that the Syrian occupation would soon be over. But everyone had to be there.

One of my closest friends, Kevin – a Lebanese-American, the tallest guy in school (we used to call him Big Leb), had already been going down every night to breach the barricades. We spoke every day on the phone. He told me that they had to break through police lines to get to Martyr’s Square. He recounted how the police and army were really on our side, how every so often they would not hold the line to let a few dozen protestors in. Still, I was not yet ready to join.

Then those bastards had the nerves to do what they did. Yes, the culprits behind the killings. It was the last straw. When I saw them on television marching down to our Downtown, when I saw them planning to assassinate our movement, our freedom; there to kill Hariri all over again, brandishing pictures of Bashar the Butcher with his despicable friend, Hassan the Terrible, I became infuriated. On March 8, the free Lebanese came to terms with their shock. The mood became tempestuous: it was about to begin. They killed our Prime Minister and a dozen other people, but we were not going to let them kill Lebanon.

Then 14 March happened. A million-strong. No point lingering on this day. Everyone who was there remembers. There would be no other day like it in my life.

Ten years on. I am twenty-five now. I had high hopes for the country, but lethargy and cynicism prevailed. People have a right to be exasperated. We were let down by our politicians. But the people have their share of responsibility. It obviously did not help that the braver ones were killed off, one-by-one, bomb-by-bomb.

Callous and selfish, Lebanese can be odious. But then again, us Arabs have no sense of lucidity. Always thinking of some far-off and farfetched conspiracy. The extent to which people will go to buttress the lies that they hear, the ludicrous theories that they so rapaciously espouse, is astounding. The dynamics of politics are certainly more complex than they seem. But we had a window of opportunity, and we ignored it. Unlike us, our enemies never miss a chance to advance their agendas. Maybe that is why we ultimately lost.

Be that as it may, February 14 remains the day the teenager I once was came to understand the true extent of freedom and dignity. March 14 was the day I learned how to fight for it.

One response to “Hariri and I, February 14, 2005 and the memories of a Beiruti adolescent”