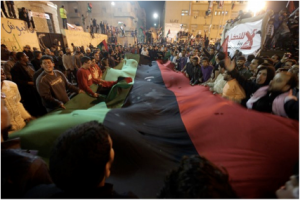 Benghazi celebrates the adoption of the UNSC resolution 1973, 17 March 2011

Many, including China, Russia and other emerging powers[1] have opposed a UN Security Council (UNSC) resolution condemning the Syrian regime for its ruthless crackdown on protestors. For many of these countries, the reproduction of the Libyan precedent has been a major cause for fear. They believe that any harsh condemnation of Damascus’s tyrannical repression could unleash a sequence similar to that of the Libyan scenario: condemnation would lead to multilateral sanctions, and from there to the possibility of military intervention if other methods were to prove ineffective. The intervention in Libya has been the cause for debate. For many, criticism has revolved around the idea that NATO military action in Libya is associated with the Iraq War of 2003. In the context of current massive human rights violations in Syria and other restive Arab states, such a comparison merits considerable attention.

For the actors and critics comparing Libya with Iraq, the arguments put forth to explain such a parallel are the following: the operations are illegal; both are US NATO-led coalitions; interest in oil and other resources constitute the key catalysts behind the interventions; and both operations are conducted under the pretence of imposing democracy by force. For the many skeptics that find common ground between Iraq and Libya, the interventions thus appear to be both illegal and illegitimate. Hence the belief that international restraint must be used when dealing with the Syrian case.

Despite these claims and parallels, Iraq and Libya, their sporadic similarities notwithstanding, have no common ground in theory.

The triggers and legal bases of the operations

In Iraq, the case for intervention was based on fabricated accusations of weapons of mass destruction and Saddam Hussein’s alleged support to terrorism. In Libya, the trigger was the imminent attack on Benghazi (700 000 inhabitants). Qaddafi had vowed in the harshest terms to launch a final assault on the opposition’s capital and to crush the rebellion[2]. On the ground, his forces were advancing towards the city and warplanes were bombing the airport and other targets. Had there been no intervention, there is little doubt that a massacre would have taken place.

From a legal perspective, the UNSC formally referred the Libyan case to the International Criminal Court (resolution 1970). The ICC considers that there are reasonable grounds to believe that Muammar Gaddafi and Saif Al-Islam are criminally responsible as indirect perpetrators for murder and persecution, which constitute two counts of crimes against humanity. All these elements form what many have described as the first real international operation based on the notion of “responsibility to protect”.

In the Iraqi case, the military action occurred despite the clear opposition of UNSC permanent member states (France, Russia, and China) and was thus deprived of an international legal foundation. Operation “Iraqi Freedom” was authorized by the American Congress unilaterally.

In Libya, action was authorized by the UN Security Council following long concerted efforts to convince all members of the SC that intervention was necessary and legitimate. Further, the Libyan opposition had been the first to request such military protection and aid. Later, the Arab League, as well as the Gulf Countries, also expressed their support for the establishment of a “no-fly zone”.

Another key difference is the absence of troops on the ground in Libya: the UNSC mandate explicitly excludes such a scenario. It authorizes Members States “to protect civilians and civilian populated areas under threat of attack in the Libyan Arab Jamahiriya, including Benghazi, while excluding a foreign occupation force of any form on any part of Libyan territory.”

The coalition acting in Libya brings together 17 nations including Arab and Muslim states[3], while the coalition in Iraq was mainly led by the US and the UK, with a minor contribution from Poland and Australia (248,000 soldiers from the United States, 45,000 British soldiers, 2,000 Australian soldiers and 194 Polish soldiers).

NATO’s full-time involvement in Iraq was limited as a result of Turkish opposition to the war. In Libya, NATO took over part of the operation only after it was made clear that the Europeans were not coming up with a credible operational alternative. Step by step, the United States increased their military role, albeit with great reluctance.

In Libya, following the reconciliation with Qaddafi after the Lockerbie settlement deal[4], the West had secured advantageous arrangements on the exploitation of the oil and other infrastructure investments. Intervention, and the ousting of Gaddafi, before the deterioration of the internal situation into a humanitarian catastrophe, was not desirable. It even contradicted previous foreign policy arrangements [5].

It is difficult to assess how genuine the intentions behind an operation are. However, Obama is no Bush, and has no intention to pursue a neo-conservative agenda along the lines of a  “Greater Middle East.” Obama is already too entangled in other operations and battlefronts opened up by his predecessor.

In the current Libyan quagmire, it is not Washington that unilaterally imposed a western model of democracy by bombing a country. It is the people of Libya who rose up to defend themselves against the ruthless terror of Qaddafi’s authoritarian regime. The Libyans’ demands were those of freedom, dignity, and democracy. However, NATO’s intervention evolved over time, overstepping its legal boundaries. The coalition actually went further than a no-fly zone to protect civilians, gradually switching to an offensive operation against the regime.

Saddam Hussein was sentenced to death after a flawed trial in November 2006. The date and place of the execution were kept secret until the sentence was carried out. Further, Saddam’s sentence was carried out only after the first set of charges were ruled upon. Having been responsible for the deaths, torture, and disappearance of hundreds of thousands in less than three decades of rule, the accelerated trial of Saddam prevented millions from being able to pursue justice.

In Libya, we can only hope that the Libyan rebels will not choose the path of revenge and accelerated trials against pro-Qaddafi forces. This could only lead to a vicious cycle of perpetual civil war. Gaddafi and his sons should be sent to The Hague to be trialed by the International Criminal Court where a fair trial, the respect for the rule of law, and the absence of the death penalty would be guaranteed. This would send a strong message to the Libyan people and to the international community about the real nature of the Libyan rebellion: one defined by nonviolence, international justice, humanism and the establishment of the rule of law.

Lastly, the Libyan intervention differs very much from the Iraq war. The latter belongs to the 9/11 era; an era defined by the West’s so-called “War on Terror.” The result was the self-fulfilling prophecy of a theoretically void concept of a clash of civilizations.

The Libyan case, in addition to the Syrian one, belongs to a new strategic era. This era is defined by the people of a region fed up with decades of ruthless tyranny and dictatorial impunity. Despite the Arabs’ courage and determination, the resilience of regimes has made it difficult and often bloody for many of these populations to overthrow their leaders alone. Whether through vital military support, or through powerful condemnation, the international community’s support is invaluable. In July, Syrian protestors even devoted a Friday (Your Silence is Killing us Friday) to call for foreign support and encouragement.

Clear support to the peaceful protesters in Syria, Libya, and the rest of the Arab world, in addition to unanimous condemnation of the crimes being committed are the absolute minimum that the UNSC should deliver. In Syria though, despite a wave of international condemnation, and with the toppling of the Gaddafi regime in Libya by force, the pursuit of a peaceful overthrow of the Assad regime may be too late. The coming weeks will reveal whether or not peaceful protests are still sustainable in Syria.

Janaina Herrera, French and Chilean, co-founded New Generation Consulting (NGC) in 2011. Comprised of a group of multi-disciplinary individuals, NGC provides expertise and strategic advice on Public Diplomacy and Sustainable Development in the Middle East and South America (MESA). Herrera served as a French diplomat from 2003 to 2010. She was posted in Lebanon from 2007 to 2010 as First Secretary in the French Embassy, in charge of Palestinian refugee camps and UNIFIL (United Nations Interim Force in Lebanon) activities. She also works as a senior consultant for the Lebanese NGO, Right to Nonviolence. Herrera is a former student of Sciences Po Paris (Masters of Political Science, 2002) and ENA (the French National School of Administration, 2009).

[2] At the time of the vote of the 1973 resolution, the people of Benghazi were unarmed.

[4] The Libyan suspects were judged in Scotland and Libya paid compensations to the family of the victims in 2002.

[5] This is especially true for Italy and France who had close relations with Tripoli and important economic interests there.